Milan, 25 May 2015 – Recover an unsecured loan to a debtor who owns real estate is easier therefore, the presence of real estate assets increases amicable collection by 55%.
The study, based on data collected in the last half of 2015, reported the following main changes on the debtors cluster analyzed:

The study shows that almost 70% of the sample is over 50 years old, the age group with the most personal assets. Owners under 30 are only 2% of the sample, confirming the ongoing difficulty this age group has in accessing the real estate market and dispose of personal assets.
Employees and retirees make up 78% of the property owners. This statistic reflects the greater ease of access to property finance for this category.
Another interesting result is the following one: 44,3% of insolvent debtors who own property have an income below 1000€ per month. We expect this figure to rise as the property market conditions improve and also thanks to two new entry points: rent to buy and real estate leasing contracts
The sample shows that the majority of properties are encumbered and the vast majority of encumbrances are judicial. This percentage is systematic of the cluster of insolvent debtors under analysis.
Owning real estate is therefore a key element on which to build tailored collection strategies, which applied to this sample delivered a collection improvement of 55%.
The sample shows a significant percentage difference in collected amounts between those who own and those who don’t own property. The sample shows the trend of percentage of collected amount according to entrusted ticket size. Even on smaller tickets (under 15,000€), registered property at the cadastre has a positive influence on the collection process.

In conclusion based on the sample analyzed, collecting on debtors who own the home in which they live yielded a 6% return versus a 3,98% collected amount on those with no property, thanks to sensitivity to the risk of losing one’s home even in the amicable collection phase. In the definition of a recovery strategy it is important to know the real estate assets of the borrowers in order to maximize the success of the performance.

Link at the study:
https://www.azinfocollection.it/wp-content/uploads/2016/05/Debtors-Identikit_-Final-ENG.pdf

Story: AZ InfoCollection, a privately owned, Italian credit servicing company, is reviewing its growth strategy, according to Chairman Antonino Restino.
The management is considering several options, including a listing on the Italian stock exchange or taking on board a private equity investor; it could also sell a majority stake to a larger industrial group, Restino said.
The company is receptive to buyside advisor pitches and direct approaches from bidders.
Recently, the company has been approached by a strategic suitor, the entrepreneur said, noting that AZ is “studying its offer”. Talks were described as being in very early stages. Approaches from other interested parties would be considered, Restino stated, noting that ideal investor would be a strategic player potentially taking a 40-49% stake in the company.
Bids for a majority could also be considered, if the investor’s focus is connected to the company’s growth strategy. Favourite suitors would be well managed financial services companies with a good track record in the industry. Ideally, AZ InfoCollection would like to talk with rivals that hold all the financial services in its value chain, from credit supply to debt collection.
Although Restino did not spell out a potential valuation, he noted that AZ InfoCollection has strong growth, reached organically. Management expects to generate revenue of EUR 25m in 2018 with 40% EBITDA, Restino said. Its turnover was EUR 8.3m in 2015, with EBITDA of 30.5%.
Having taken investors onboard, the company would subsequently work towards an IPO, to be executed in the next five years, the chairman said. He described the IPO as an appealing option to raise its reputation internationally.
The company expects business opportunities to grow between 2016 and 2018, as several European countries could be attractive regions for its expansion. Firstly, AZ InfoCollection aims to expand its services in Europe, tapping into Greece, which was described as potentially very appealing due to the extent of non-performing loans (NPLs) held by Greek banks.
Non-performing loans constitute the single most important problem for Greek banks, Restino said, noting that this is an opportunity for AZ InfoCollection’s core business. Recently, JP Morgan analysts have warned investors that falling interest rates in the Eurozone will put more pressure on the banking sector, giving the banks less revenue with which to offset losses incurred on bad loans.
The AZ InfoCollection group was founded in 1974 in Naples by Antonino Restino, as A-Zeta srl, a business and private investigation and information search company, according to the company’s website. Today, it provides a wide range of different financial services including investigation and insurance anti-fraud corporate investigation, stewarding and event security, welcome services, security technology and credit collection. Major competitors include Lince, Cosmos and Cerved. Its clients are Italian insurance firms, banks, consumer credit companies, credit servicers, financiers, distressed asset funds, legal firms, large corporations, utilities companies and SMEs.
In May 2014 it joined the important Elite circuit, a three-phase programme organised by the Italian Stock Exchange, to help SMEs prepare for listing.
AZ InfoCollection has a workforce of 150 and 50 consultants. The company headquarters are in Naples, and it has offices in Milan and Rome.

by Micaela Osella in Milan 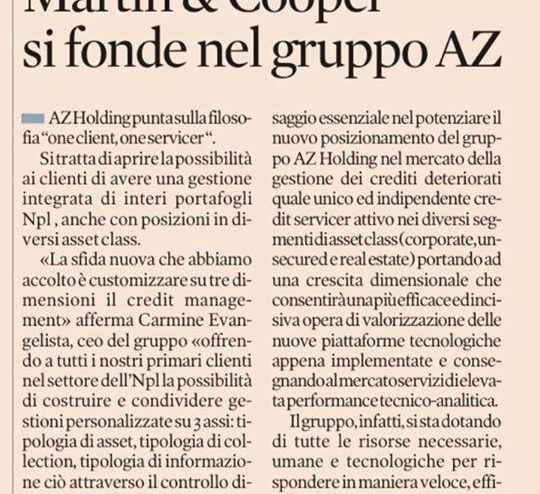 From the article published on Il Sole 24 Ore Journal today: 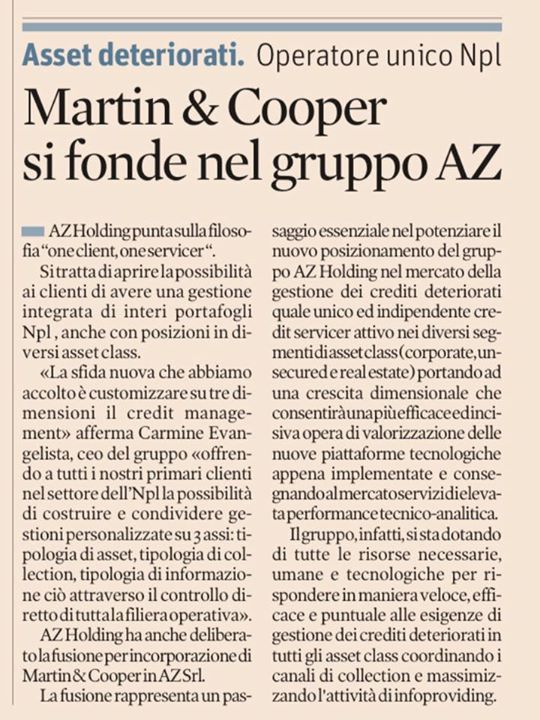 AZ InfoCollection focuses on the philosophy “one client, one servicer”
Is now possible for clients to have an integrated management of entire Npl portfolios, with positions in various asset classes.
“The new challenge that we have undertaken is to customize the credit management in three dimensions” says Carmine Evangelista, CEO of the group, “giving all our primary customers in the NPL sector the ability to create and share personalized management of three dimensions: asset types, type of collection, type of information through the direct control of the entire supply chain”
AZ InfoCollection has also approved the merger of Martin & Cooper in AZ Srl.
The merger represents an essential step to reinforce the new positioning of the group into the credit management market, AZ InfoCollection is committed to manage the non performing loans as the only independent credit servicer active in different asset classes (corporate, real estate and unsecured). The merger confirms also the company mission to growth in dimension to allow a more effective and incisive work in the market thanks also to new technology platforms just implemented with aim of deliveringing to the market high-performance technical services.
The group, in fact, is being equipped with all the necessary resources, human and technological resources to respond quickly, effectively and promptly to the needs of non-performing loans management in all asset classes, coordinating the channel of collection and maximizing the business of infoproviding .